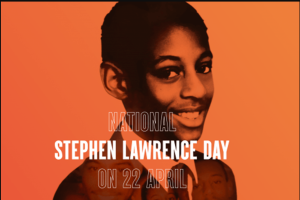 Stephen Lawrence Day was first celebrated in 2019, and takes place annually on 22 April. The date marks the anniversary of Stephen’s death in 1993. The day is marked officially in the British calendar  to celebrate  Stephen’s life and legacy.

Stephen Lawrence Day is about the part we all play in creating a society in which everyone can flourish. It is an opportunity for children and young people to have their voices heard, make the changes they’d like to see and create a society that treats everyone with fairness and respect.

For us in NCL CCG, the legacy of Stephen Lawrence gives us the impetus to work collaboratively to tackle discrimination and inequalities. We are determined to use our experiences and organisational levers to continue building on our work around racism and bigotry and making progress.

The Stephen Lawrence Day Foundation was established to inspire a more equal, inclusive society and  create opportunities for marginalised young people in the UK.

Stephen Lawrence Day aims for a society where young people feel inspired about what they can achieve in their own lives whether in the classroom, in their community or in a career. The Stephen Lawrence Day Foundation wants young people to be involved in creating the kind of community they want to live in and to have a strong voice in building a fairer and more inclusive society.

“The events of 2020: – George Floyd’s death, and the subsequent resurgence of the Black Lives Matter movement, along with societal inequalities exposed and exacerbated by COVID has made us reflect on how we engage with our communities. This brought a sharp focus on what I want to be achieved in Stephen’s name. I want Stephen Lawrence Day to be a reflective learning experience, and a celebration and a journey toward greater equality and inclusion for all.”